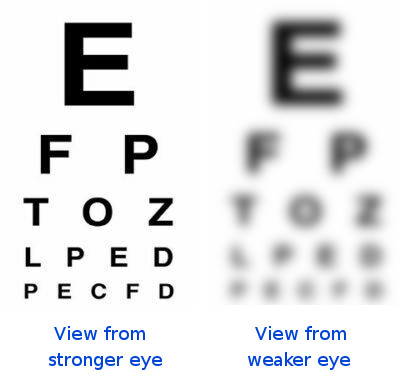 Amblyopia most often occurs when the image coming from one eye is of much worse quality than the image coming from the other eye, and the brain responds by ignoring the image produced by the poorer eye.  If left untreated, the brain can eventually lose the ability to process visual information from the ignored eye, effectively causing blindness in that eye.  Amblyopia in both eyes may also occur under certain conditions.

Amblyopia occurs in approximately 4% of the population.  Amblyopia is sometimes referred to as “lazy eye,” but this is a non-medical term that is also used to describe strabismus (crossed- or wandering-eyes) and ptosis (eyelid drooping).

In children, amblyopia sometimes produces no symptoms that parents would notice. If left untreated for too long, a child with amblyopia will permanently lose the potential for normal visual development.  Amblyopia is a medical condition that requires medical assessment and intervention in order to have any possibility of visual rehabilitation.

There are different causes of amblyopia:

Deprivation amblyopia occurs when the visual axis is blocked by some obstruction, preventing a clear image from forming on the retina. The blockage can come from a drooping eyelid, as in congenital ptosis, or from an opaque lens (cataract) or opaque cornea due to corneal disease. ​

Strabismic amblyopia occurs when the eyes are misaligned and the brain receives conflicting information from the deviated eye. To avoid double vision or visual confusion, the child’s brain will stop using the turned eye and the vision will correspondingly decrease.

Treatment for amblyopia consists primarily of glasses combined with patching or atropine 1% eye drops. With patching, a patch is placed over the better eye in order to encourage the brain to develop better visual processing of the information coming from the weaker eye. A child’s vision usually takes months to years to improve after initiating amblyopia treatment, as changes in the way the brain processes visual information develop gradually. Older children with amblyopia often require longer periods of treatment than younger children. Although many children will have some response to amblyopia treatment, not all children will obtain 20/20 vision. Atropine 1% eye drops are indicated if a child is unable to wear a patch.

Scroll back to top